Skip to content
Breaking News Foreign News Legal Matters State Of The Nation
New York, September 18, 2018–An Abuja magistrate’s court on Monday struck out a case against Jones Abiri, publisher and editor-in-chief of the newspaper, Weekly Source, Samuel Ogala, a lawyer who represents Abiri, told CPJ. The court ruled that it did not have jurisdiction over the state where the alleged wrongdoing took place, Ogala said. Abiri, who was detained without charge for over two years until his release last month, was accused of criminal intimidation for allegedly sending text messages demanding payment from two oil companies in Nigeria’s southern Bayelsa state, according to CPJ research. CPJ could not determine if prosecutors plan to file charges in Bayelsa state.

“Jones Abiri’s arrest, detention, and subsequent criminal prosecution is a stain on Nigeria’s press freedom record, but the court’s decision to end the case against him is an important and positive step,” said CPJ Africa Program Coordinator Angela Quintal. “The Nigerian government should seize this opportunity to take further action to improve conditions for journalists and ensure they can work without fear of arrest or prosecution.”

In a separate legal decision on September 13, a federal high court in Abuja held that the Department of State Security’s detention of Abiri was illegal and violated his fundamental human rights, Ogala told CPJ. The court ordered the federal government to pay Abiri 10.5 million naira (US$29,000) in damages and litigation fees, according to Ogala and Marshal Abubakar, another lawyer representing Abiri. 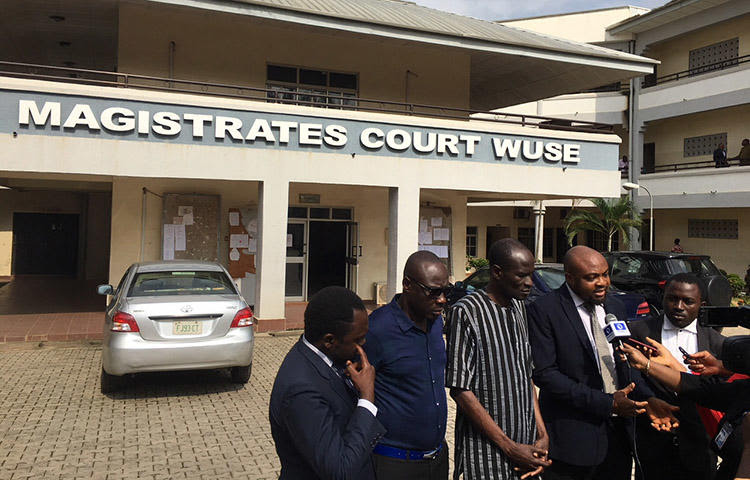 Jones Abiri, pictured third from left with his legal team, speaks to the media on September 5. An Abuja court has dismissed the case against the Nigerian journalist. (CPJ/Jonathan Rozen)